As parents around the country grapple with whether or not they should send their children back to school, a mother has revealed her family’s trusted pediatrician told her that her kids will eventually come home with coronavirus if they resume in-person classes.

Aisha Saeed, a New York Times bestselling author from Atlanta, Georgia, shared the details of their ‘sobering’ conversation in a Twitter thread this week, explaining that while it’s just one pediatrician’s point of view, the doctor is someone she trusts.

‘I asked her point blank “You’ve known me since my kids were infants what should I do?”

‘She said that though the rhetoric is kids are not as affected, she has seen a lot of kids coming in w/ COVID. Not much March thru May but ever since summer camps opened, kids are coming in,’ Saeed, 40, explained.

‘She said it’s a 10% positive test rate at their clinic. And kids are coming in with high fevers. Not the asymptomatic stories I mostly hear,’ the writer continued. ‘No Kawasaki yet either thankfully, but definitely kids who are pretty ill.’

‘She said if I choose to send my kids to in person school I need to accept that my children will come home with it eventually. There is so much community spread here.’ 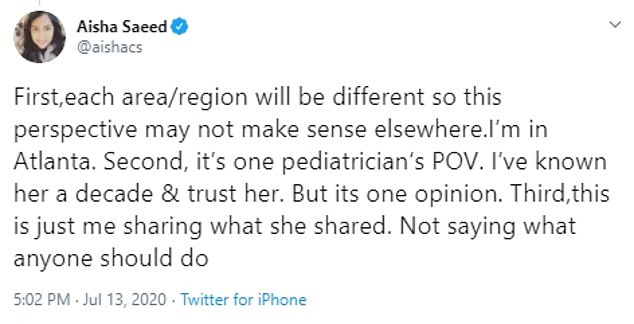 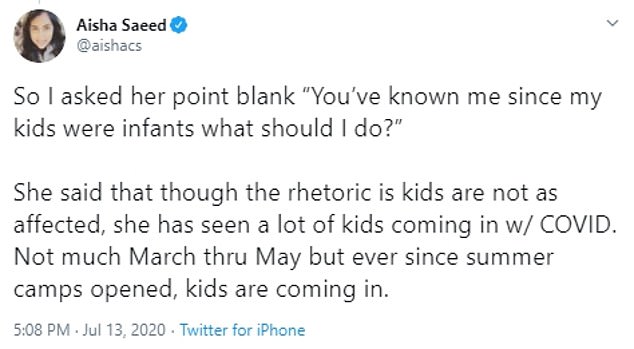 Saeed stressed that she was just sharing what her family doctor told her and not telling anyone what they should or shouldn’t do. She also noted that it was just one opinion and each region is different.

‘That’s it. That’s the thread. It may be nothing revolutionary but it was sobering for me because headlines and pundits are one thing, but a doctor I’ve trusted my children’s well being too since each were born… that opinion goes a long way for me,’ she concluded.

‘Also- I want to add, It was NOT what I wanted to hear. I asked her secretly hoping she’d comfort me and talk me down (as she has since they were babies). I wanted the solace of her waving the worries away. Didn’t happen today.’

Many parents who are also stressing about making the difficult decision thanked her for sharing what her children’s pediatrician told her.

‘I am agonizing over this,’ one mom responded. ‘We have a 5yo. She’s supposed to start Kindergarten in a month. She can’t learn online. My husband and I work full time from home. If I keep her home, I’ll lose my job and she’ll have delays. I don’t know what to do.’

‘Thanks for sharing. I’ve secretly also wanted to chat up our pediatrician and my oldest is 19. You confirmed my fear that this would be like the time I took in my 3rd kiddo at 5 wks old wanting the “it’s fine, nothing to worry about” and instead was admitted ASAP,’ someone else commented.

‘I talked to my doctor about sending my son to daycare. He said don’t do it. Not what I was expecting to hear,’ another shared.

‘Right??’ Saeed responded. ‘Idk why but I thought she’d say it’s fine if they are masked and distanced and checked for temps. Nope.’

A few days later, the author shared on Instagram that she has decided to homeschool her children for the time being.

‘Sent the hardest email I’ve ever written to my kids’ school, letting them know we won’t be back. Kids are grieving. So am I,’ she wrote. ‘I promise them as soon as it’s safe, they’ll be back. “When is that?” They ask. And for this I have no response.

Saeed recalled how she looked to her own mother for comfort when she was their age, and now she is the adult.

‘I so wish I could make it all better. I wish I had an answer. All I’m staring down right now is a well of fear,’ she admitted. ‘In the meantime, I tell them what I do know to be true: we can mourn what could have been but what we have is this, right now. And that includes each other.

‘We’ll spend this coming year figuring things out together together together as we have since March and we will find moments of grace and joy alongside the rest of it. This is not easy. But the only way out is through.’

Georgia has seen a steady increase in the number coronavirus cases over the past few months – with more than 121,000 reported in the state so far. Statewide, 3,043 people have died from the illness. 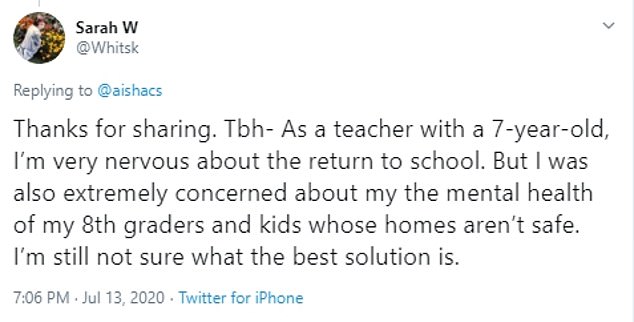 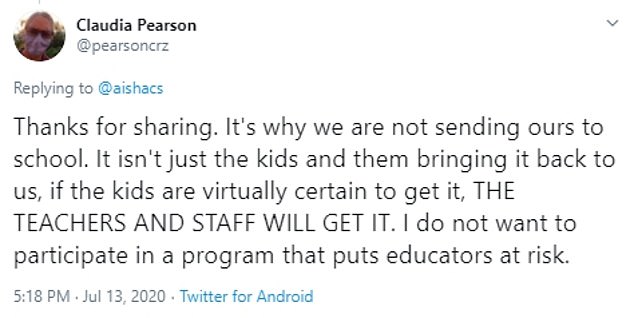 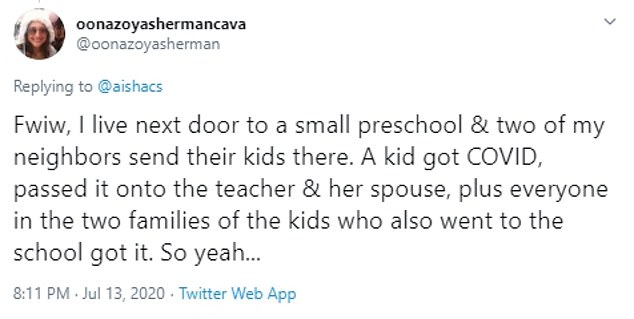 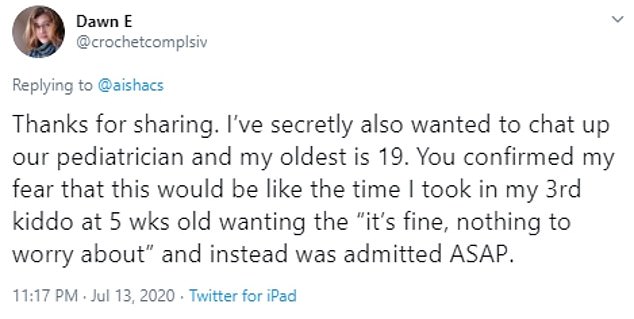 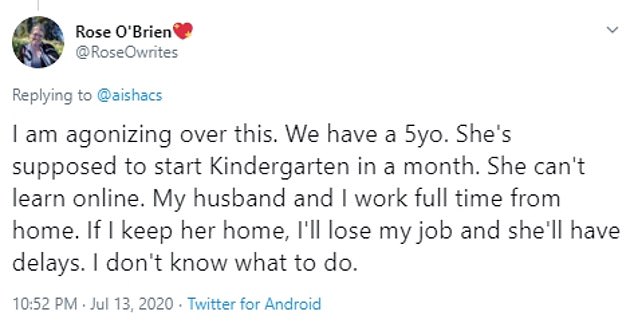 Fulton County, the area in which Atlanta is located, has seen the greatest impact in the state thus far, with more than 12,180 cases and 333 deaths.

On July 7, Atlanta Mayor Keisha Bottoms – who has been named as a potential running mate for Democratic presidential candidate Joe Biden – revealed that she had tested positive for coronavirus and announced plans to quarantine for two weeks.

‘My symptoms won’t get any worse. they told me I have a low positive which means I’m on the way up or down. They told me to treat it like I’m positive, in terms of quarantining,’ she said during an appearance on GMA.

One week later, it was revealed that three people in their 20s who took a Delta Air Lines flight from Atlanta to upstate New York on July 6 had tested positive for coronavirus the following day.

All of the passengers, two 22 year olds and one 27-year-old, live in Troy, which is about eight miles from Albany, New York. All three became symptomatic on July 7. It’s unclear the passengers were traveling together.

Tyler Perry Gives 1,000 Kroger Gift Cards for Police Officers to Hand Out to Atlanta Residents as He Says ‘This is About Good People Who Need a Hand Up’ and… 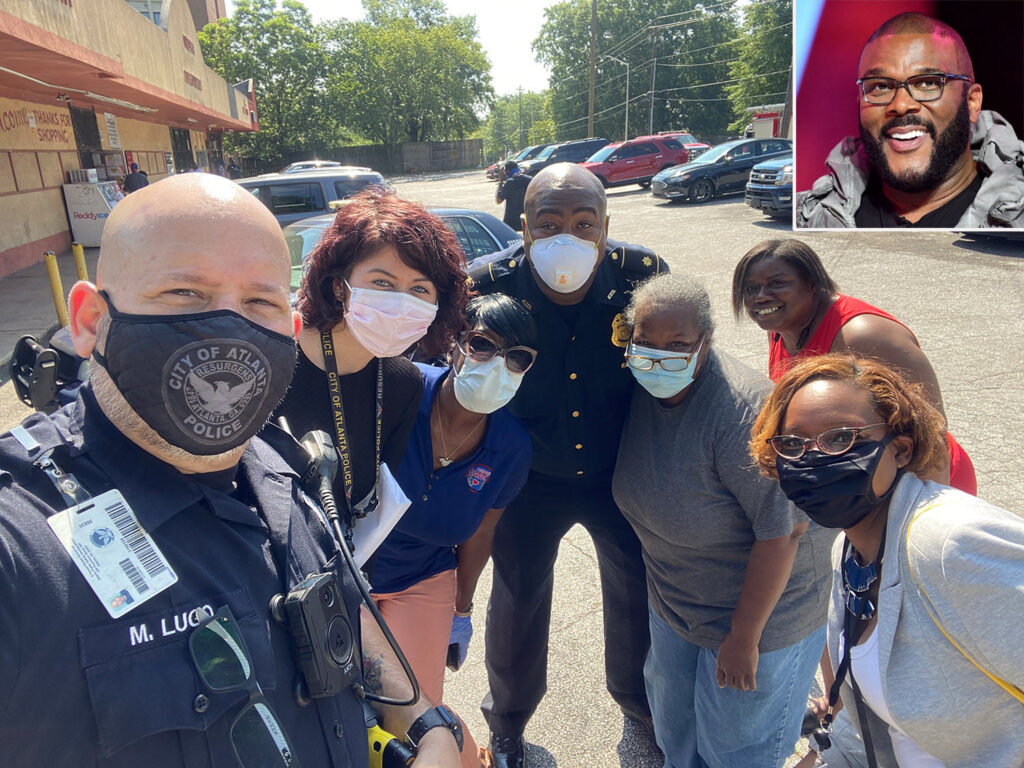